How Digital Signage Can Improve Business

This might sound ridiculous, but have you ever thought about the ROI of breakfast?

You could wake up a little earlier and make a healthy meal of an apple and some scrambled egg whites, plus instant coffee. This meal might cost you less than two dollars to make, but it would provide high returns of increased energy, leading to increased productivity throughout the morning.

Or you could drive through a fast food joint on your commute and pick up a similar meal (perhaps egg whites on an English muffin and coffee) for a slightly higher cost. This might provide similar energy levels throughout your day, and allow you to catch a couple more minutes of sleep.

Finally, you could sleep in and skip breakfast altogether. Your investment, so to speak, would be whatever money you miss out on due to being hungry and still half-asleep at work; the return would be those valuable extra minutes of sleep.

That’s a fun mental experiment, but the costs involved are comparatively tiny. If you misinterpret the data available, it’s not a big deal.

Now let’s go to a much bigger example: digital signage.

You don’t drive hastily through the drivethrough to get one of these. And your ROI needs to be high, as opposed to a couple bucks over breakfast variations.

But the potential costs of installing a digital signage system aren’t measured in ones of dollars. The cost of installing such a system have gone down in recent years, dropping 18% for a 100-unit system between 2006 and 2009 and still further by now, it still represents a pretty significant investment.

And if you’re a small business owner, or work in an industry with tight profit margins—or are just a savvy businessperson—you want to know that your investment is worth it. You need ways to calculate the ROI for your signage system. 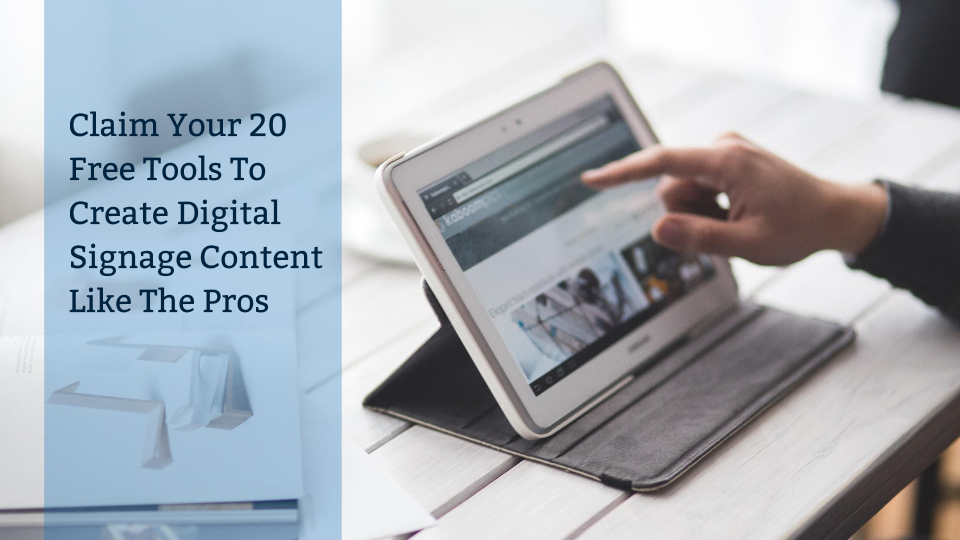 You’ve doubtless heard the statistics about the potential payoffs of investing in digital signage. They sure sound tempting!

For example, researchers found that four out of the five brands they studied experienced increased sales with the introduction of digital point-of-sale advertising for their products at retail locations.

Another example: one study found that 83 percent of small business owners who had invested in LED signs believed that their sales increased afterwards, and 86 percent said they thought the signs brought in new customers.

However, that same study cautions that dollars spent in advertising may take weeks or months to pay off (or not), and that many factors may be at play.

It’s simple to study the ROI of, say, installing a gumball machine. Just compare the cost of purchase, installation, and upkeep to the amount of money it brings in. But it’s not as intuitively simple to calculate ROI for digital signs.

Is it possible to do without commissioning a study?

In fact, yes! Below, you’ll find a three-step process for designing a method of tracking ROI, along with a handful of specific strategies to get you started.

Step 1: Decide what constitutes ROI for you

Before you even invest in a digital signage system, you should have a clear picture of your goals.

Do you want to increase customer satisfaction by introducing queue management techniques via digital signs, in hopes of shortening their perceived wait time?

Are you hoping to promote specific sales or special offers?

Maybe you’re planning on integrating digital signage with beacon technology, so that the approach of a customer with the right app installed on their phone would trigger a targeted message on-screen, increasing customer engagement.

Whatever the case, your goals will determine what aspect of ROI you’ll want to focus on.

After all, ROI doesn’t have to be monetary. It can be more abstract (though still quantifiable) as well.

If the first example (happier customers in line) is your goal, then you wouldn’t look for an increase in sales—you’d, perhaps, ask customers how long they believed they had stood in line and look for a decrease in the average after installing the new signage.

Or you could be focusing on increasing your visibility. If that was the case, perhaps you’d be more interested in looking at whether your social media presence increased after installing the system.

Whatever metric you decide on, set a numerical goal: for example, a 30% decrease in perceived wait time within the first month of installing your screens at the checkout line. You want a concrete way of determining if the digital signage system is worth it.

After you determine your goals, you can develop a strategy for determining ROI.  Here’s five strategies to give you some ideas.

As mentioned above, if your goal is increased visibility and generating conversations, one great way to track that is by using social media. There are many, many tools for pulling statistics from platforms such as Twitter and Facebook.

Likewise, there’s many ways you could use a digital signage system to enhance your visibility on social media.

For example, perhaps your store has its own hashtag, which your customers can use on Twitter. After installing your digital signage system, you can watch for an increase in use of that hashtag.

You could program the screens to display a message prompting customers to Tweet about a certain topic, showing some of their responses on the screens in-store. Customers love the chance to interact and be heard, and you get a publicity boost in the process.

20 Free Tools To Make Digital Signage (In Under 15 Minutes)

If you’re hoping to measure ROI in terms of customer impressions, you’ll need a method of tracking that. While you could simply look at foot traffic through your store, that doesn’t reveal whether or not customers noticed the signs, and more importantly whether the signs prompted them to action.

The above-mentioned social media prompts could be one way to measure that, but not everyone is willing to use their personal feed to promote a business.

Instead, consider promoting a giveaway and measuring impressions based on the number of customers taking advantage.

One study used that strategy to give away tote bags, but you don’t need to break the bank. Instead, perhaps put a stack of coupons beneath the sign and have the sign prompt passersby to take one. Track the number of coupons taken to determine how many meaningful impressions you’re making.

This one is simple but powerful. It involves taking the cost of your current system and comparing it to the potential costs of purchasing, installing, and maintaining a digital sign or signage system.

This would be a replacement for your current space on a traditional billboard.

In this case, you’d simply add up annual costs for your current strategy (rent; the cost of printing up and posting new content; etc.) and compare it to the estimated cost of implementing your new strategy.

4. Feedback (from customers and employees)

Feedback falls into the more abstract category of ROI, but it’s still valuable—especially when the numbers are proving difficult to interpret.

Do your customers find the signs flashy and distracting, rather than eye-catching and appealing?

Do they remember what they read on the signs?

Do they habitually check the displays for today’s promotions and deals?

Can they read the signs easily, or is the font size too small?

And what do your employees think? Have they noticed customers looking at the signs? Do they feel they enhance the store’s ambiance?

You won’t know until you ask.

While conducting surveys can be time-consuming, the data yielded can be invaluable. It can be a chance to collect demographics information as well. Perhaps you’ll find millennials are most likely to like the signs, or that middle-aged women have the best memory for what they see. This information will help you tweak the signs’ content (which we’ll talk about in the last step).

With modern advances in technology, you might not have to employ outside strategies at all! Instead, your method for measuring ROI might be built into the digital signage itself.

For example, some digital signs can now measure proximity of customers to the sign, and how long they spent there, in order to tell you how many people saw and paid attention to the sign.

If the signs are interactive touchscreens, you might be able to collect demographic and shopping information right there on the sign.

Once you’re armed with the demographic information and feedback you’ve collected in the process of determining ROI, you can use that information to maximize your ROI. If you’re finding that millennials are paying the most attention to your signs, you can target content towards them.

If your older shoppers think the words are too small to read, you can increase font size.

It turns into a feedback loop: determining ROI enhances your ability to increase ROI.

Did we miss any great strategies for tracking ROI? Tell us about them in the comments!