If you paid attention to digital signage in the seventies, you’ve had the chance to witness the entire development of the industry—and what an incredible rise it’s been, but are you aware of all the digital signage trends?

Back in the seventies, long before the arrival of the modern Internet, enterprising shop owners played VCR tapes on televisions to attract customers. Of course, all content had to be prerecorded, not to mention rewound once you reached the end of the tape.

Today, however, is another era. With the industry’s rapid growth—perhaps as high as 12 percent this year—and the continued accumulation of promising data about digital signage’s usefulness, you might even call it a golden era.

But not every exciting new gimmick sticks. And in a rapidly evolving, marketing-focused industry like digital signage, it’s vital to stay on top of emerging trends to keep your approach fresh.

What trends should you aware of in 2016? 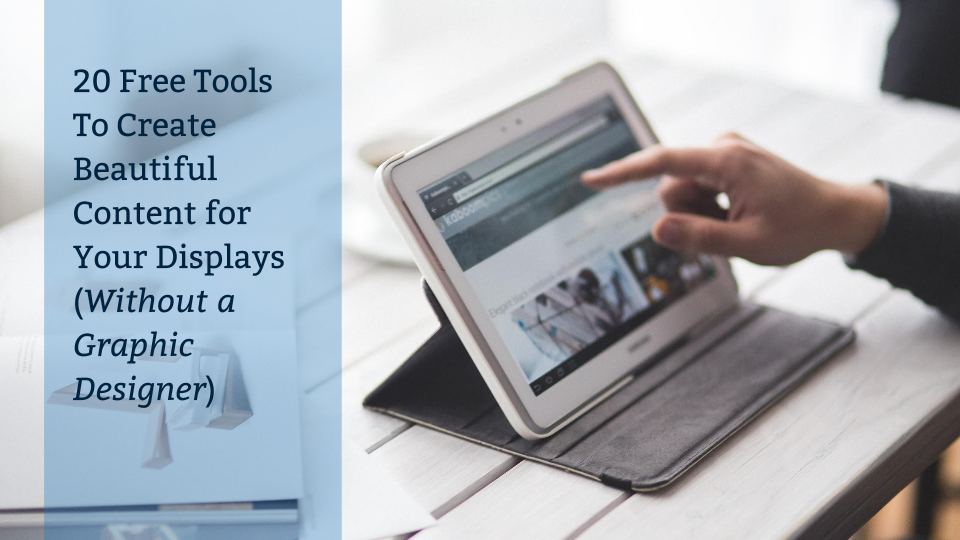 Digital signs are inherently more attention-grabbing than a traditional static sign. Thanks to recent technologies, digital signs can be even more engaging to customers and viewers—in fact, they can be interactive, turning viewing them into a personal experience.

Retailers, especially, have a strong interest in increasing impressions made, and 2016 will doubtless see increased efforts to include interactive elements in digital signs.

One major area: the use of beacons, particularly Bluetooth Low Energy-enabled ones. Beacons detect the proximity of people with the right app installed on their smartphone and broadcast their identity to the app. The app then queries a server which sends personalized information back for the user. This could be something like a coupon.

If you want a more in-depth explanation, check out this article.

But what if you add a digital display to the mix? A customer could walk into your store and be greeted by name on a screen, or offered targeted advertising based on their shopping history with you.

There’s even facial recognition software to help signs recognize the gender and age of a viewer and display appealing content for their demographic.

Touchscreens and interactive projectors are another big possibility here. Customers can navigate digital catalogs, play simple games, and so much more. Interactivity is a major element of wayfinding stations as well.

In 2016, it would barely be an exaggeration to say that everyone’s on social media. With 74 percent of all adults on the Internet and 81 percent of all small and medium businesses in America using at least one social network, odds are that both your customers and competitors are making use of the medium.

Social media is a great way to drive customer interaction and loyalty, and Digital Signage Today predicts it will be even bigger than ever this year. It’s time to bring it to your digital signage networks.

Retailers such as Macy’s have had great success in marrying the two technologies with campaigns like Magic Fitting Room. These touchscreen mirrors allowed shoppers to choose clothing, which would then be superimposed over the shopper’s image. (Customers could even alter the color or size of each item with a couple swipes.) The shopper could then share the outfit to social media to get their friends’ input.

However, you don’t have to get that elaborate with your integration. Check out our tips for adding social media feeds to your digital signs!

Mobile integration is closely tied to both interactivity and social media.

As of 2015, a full 68 percent of US adults owned a smartphone or tablet. People are ever-more accustomed to interacting with the world through the filter of their small screen.

2016 should see retailers, in particular, looking for new ways to take advantage of that with digital signage.

For example, a digital sign might display a QR code for a customer to scan in order to receive a special offer.

This year, screens which can read Apple Pay-enabled phones for ultra-convenient payment will debut on the U.S. market.

Or, you could go big and meld social media, mobile, and digital signage into one big advertising effort, like Coke did with their What’s In a Name campaign. People around the world could tweet their name at Coca Cola, and Coke would generate a one-sentence story about each name, which then were displayed on a massive billboard in Times Square.

8K displays like the one displayed at this year’s digital signage expo are going to be out of most people’s price range for a long time.

But there’s another uber-crisp option that, this year, should be a more realistic option than ever before.

4K TVs have four times as many pixels per square inch than full-HD,1080p screens. When first introduced, these screens were absurdly overpriced and seen as a mere gimmick.

Over the course of 2015, an increase in options on the market led to an abrupt drop in prices, and a rise in the availability of high-quality features made 4K displays an attractive and affordable option. In fact, with a bit of luck, you could snag a giant 60-inch display for as low as $800.

Consider tiling a number of smaller screens in order to achieve a similar effect for much less. Your content managing software can help you synchronize the content in a pleasing way.

You should be seeing them pop up in the hospitality and retail sector, especially in industries where presenting a sleek and high-class image is essential.

We’re not talking about outdoor LED billboards here. 2016 should see an increase in prevalence in LED screens indoors.

Industry insiders are predicting that this year will bring a flood of affordable options to the market, thanks to recent acquisitions by giants such as Samsung and Yesco, and traditional display manufacturers expanding into LED options.

This will mean not only better prices, but a greater variety of sizes and shapes.

This is excellent news, because LED screens have a wide variety of advantages. They’re energy-efficient and long-lasting: perfect for creating eye-catching displays without breaking your energy bill. Not only that, but they offer incredibly rich colors, and, thanks to the ability to dim individual LEDs to lower light output levels, greater contrast levels than traditional LCD screens.

But consider this. VR is breaking into the mainstream with Google Cardboard, Samsung Gear, and the much-hyped Oculus Rift. Glasses-free 3D entertainment is available in the form of the Nintendo 3Ds and, very soon, 3D televisions.

It’s even made its way into the digital signage sector.

Norway’s fifth-largest company installed an entire autostereoscopic (that is, 3D without the use of special glasses) video wall in its operational center last year. The wall is over 10 feet wide and eight feet tall, and is essentially the first of its kind.

In the Netherlands last year, a graphics design agency turned its focus to 3D holographic display cases. They’ll be promoting them for use in everything from advertising in malls to use as showpieces at trade shows.

While wide adoption of 3D tech in digital signage might be a way off, it’s not too soon to start thinking about how you can use it. Virtual tours? Product demos? The possibilities are pretty cool.

Whether it becomes mainstream or if it remains in the “cool toys” category, time will tell.

With the market growing steadily, it shouldn’t come as a surprise that this indicates more digital signage, everywhere, for everyone. You’ll be seeing more digital signs in restaurants, in retail locations, in offices, in schools (2,000 universities installed digital signage networks in 2011, and that number has continued to grow)…

And you’ll be seeing them used for an increasingly wide variety of communication and interaction purposes.

For example, in 2015 McDonald’s introduced a new custom burger option at select west coast stores before bringing them to locations across the nation. What makes it unique? Digital signage. Customers choose buns, meat, and toppings using a touch-screen kiosk and pick their creation up at the counter.

But the options are limited only by your imagination (and budget).

No matter who you are and what kind of business you have, there’s some way for you to make digital signage work for you. Be on the lookout for new ways to make use of it and the unique advantages it offers.

It can be hard to predict the future, especially in an industry like digital signage, which is characterized by rapid growth and quickly evolving technologies. However, we can guess with some certainty that 2016 will be a year focused on integration of digital signage.

Rather than an afterthought or a separate effort, it’s going to become more deeply linked to all aspects of connecting with and serving customers. It’ll be used for more diverse purposes and linked up to social media. This increased immersiveness will be aided by emerging and increasingly widely available tech like high-resolution LCD and LED screens.

We put together an updated, more comprehensive list of trends for 2017 and beyond, so if you’d like more ideas, check them out here.