7 Ways to Use Digital Signage in Sports Stadiums

Sports stadiums are a sweet spot for digital signage. With thousands of fans as a captive audience for hours, a stadium can offer many points of interaction from vendor stands, advertising networks, wayfinding, stadium digital signage, and much more.

Static billboards are a thing of the past at sporting events, where digital signage offers a fresh perspective, dynamic videos, and even interactive options for game-goers.

Here are some ways that guests can interact with digital signage at a sports arena:

As content management becomes more sophisticated relative to digital signage, real-time data is vital to ensure that the audience is seeing the most relevant and up-to-date information available.

At the 2019 U.S. Open in Flushing Meadows, NY, multiple video displays inside and outside the arena were fed specific data that kept fans up to date with live-action information and player stats, essentially “broadcasting” the info via a video screen format.

The producers of live sports events have always understood the value of real-time information, and digital signage has created a vehicle for that data which is ultimately engaging today’s audience in ways it never could before.

If you’ve ever stepped foot into a stadium the size of a small city, you may have felt somewhat overwhelmed, or even gotten lost. Smart venues understand that people are moving at a faster pace today than ever before – even during their “leisure” time, such as at a sports event.

Attendees expect to be able to get from the parking lot to their designated seats without incident or confusion.

The signage allows for easy movement of fans within the sports stadium’s passageways. And in the parking lots, a similar strategy relieves traffic and guides drivers in and out of the stadium parking areas with ease.

When a mass of people (more than 82,000 in the MetLife Stadium on a good day) can be directed without incident, it makes for clear paths and happy fans. 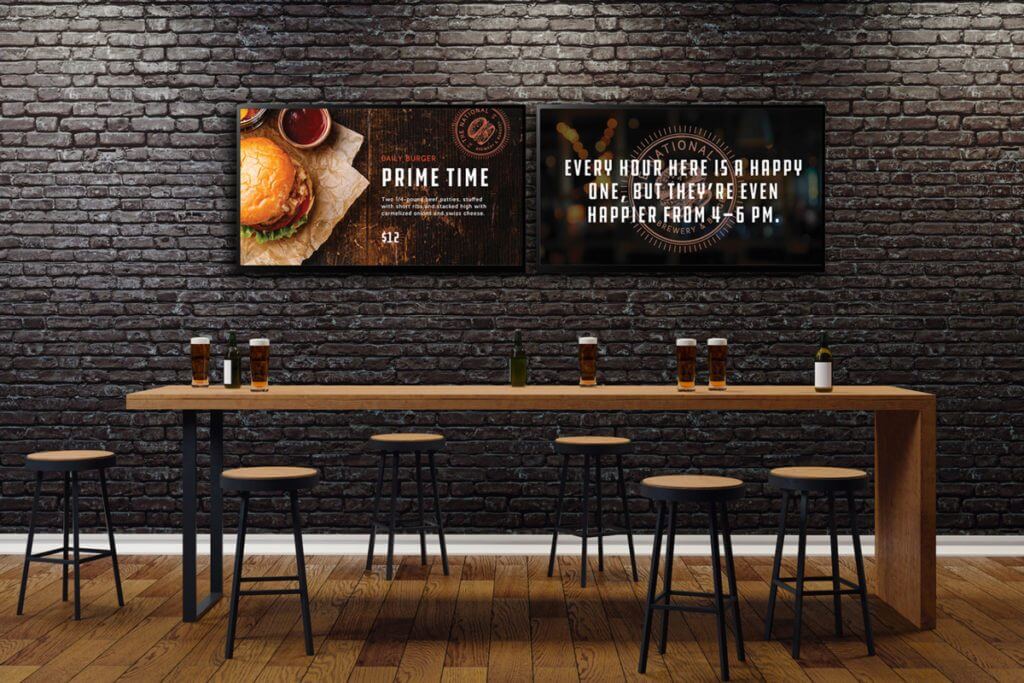 Videos, motion graphics, even music can capture an attendee’s attention faster than a weathered banner.

But the real value is in strategic digital advertising by vendors that display their ads at key locations in the stadium: food stands, urinals, and wayfinding kiosks for example.

The Air Canada Centre in Toronto understood this value and invested in more than 300 digital signage screens to support a digital content strategy that offered more than just ads and hard-core hockey players.

It shared a full content model and business strategy that, if looped regularly, could pay off the $3 million dollar price tag within two years.

Digital Menu boards have become the norm in every sports stadium and arena across the land. While it’s an American tradition to buy a hot dog and a soda at a baseball game, fans are demanding more variety and choices on the menu. And since food and beverage sales help drive the venue’s bottom line, more choices are being offered now than ever.

Digital menu boards have been shown to boost sales with their graphic presentations, and reduce operating costs by eliminating static menus that get discarded. And they’re incredibly dynamic. If an item is sold out, simply remove it from the menu. If it’s cold, promote hot chocolate.

When attendees show up to a game, stadium owners don’t want it to be for the last time. They want attendees to keep coming.

When positioned correctly, it can also advertise to area drivers. A banner tied to the front of the stadium can’t achieve that kind of pull. 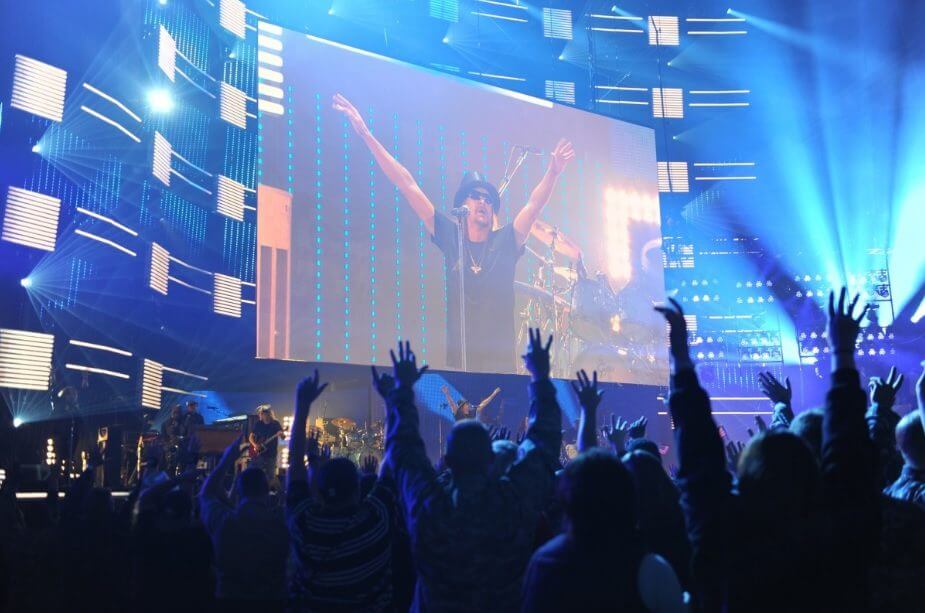 Concert tickets are expensive. The average cost to attend a touring music show in North America has almost quadrupled over the past two decades, from $25.81 in 1996 to $91.86 through the first half of 2019, according to researcher Pollstar.

To add insult to injury, you could find yourself in a seat that has only a partial view of the lead singer. This is where digital signage saves the day. Venues position screens to ensure that everyone in the house has a view – or multiple views!

You can’t have an executive suite without all of the latest bells and whistles. Team owners and their guests should be able to enjoy the game up close and personal.

If you’re lucky enough to have access to an executive suite on a cold January Sunday, digital signage can bring the game to you. Enjoy a scotch on the rocks in your climate-controlled glass box while you watch the home team win the big game.

Some popular options for the suites are digital menus, interactive games, and ads for booking seasonal suites for the company.

Personal viewing rooms allow for meetings to take place, even during the game. Digital signage is savvy, showy, and intelligent. All the more reason to keep your executives happy with top-notch technology.

In the end, digital signage in sports stadiums and arenas elevate the fan experience. From displaying player stats and video headshots to sharing instant replays, attendee engagement increases when a big screen can show them what they might have missed while they were buying nachos because they saw them on a digital menu board.

If you haven’t been to a sporting event in a long time (or ever), grab some tickets and make a night of it. Even if you’re not a sports fan, but are a digital signage fan, it might be worth the trip to see how your home stadium is playing the digital signage game.

How does your home stadium use digital signage? 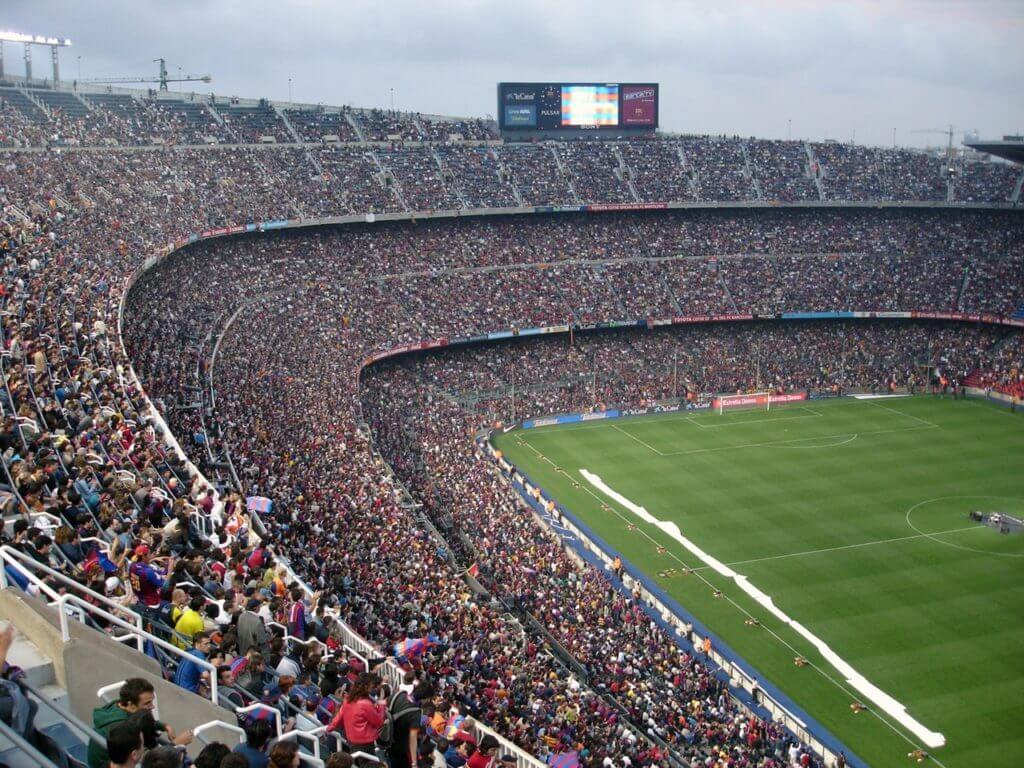